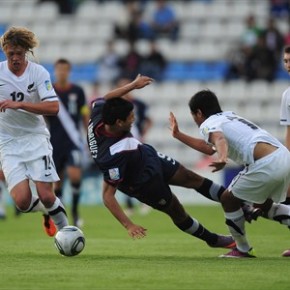 Jesse (from the left) playing against the United States at the 2011 FIFA U-17 World Cup. (c) FIFA.com

It’s not that common to see a young player from New Zealand trying to make a name for himself in Italy, a country not very well known for its relationships with the “land of the long white cloud” when it comes to football. But this means little for Vicenza Calcio young gun Jesse Edge, who wants to be the first Kiwi of a long series to build a tradition of New Zealand footballers in the Mediterranean land.

An 18-year-old with experience at two youth World Cups, Jesse is considered by many as for the future and is part of the much-claimed golden generation which could bring smiles and success to the football lovers of the country for the years to come.

Your move to Vicenza seemed to have come out of nothing, as many thought you would have signed for an English clubs after your trials! Tell us about how it happened.

I had a trial in England at Birmingham City which fell through in the end. My now agent Stefano Tigani and Fillippo Contorno were talking with my manager Declan Edge and I about a trial here at Vicenza Calcio. The coaches liked what I had to offer and it all went from there.

According to you, which are the biggest differences between youth football in Italy and New Zealand?

I can’t judge really because I have played men’s football in New Zealand since the age of 14. The standard here is good and I am here to keep progressing myself as a player and moving forward. This is a very good experience for me and already I have learnt a lot.

You are the second New Zealander who has played for Vicenza in recent times, after Liam Graham spent two years in their youth system from 2010 to 2012. Do you think this growing relationship between the club and New Zealand could open the doors for other youngsters who aim to play in a top football nation in Europe?

Many young New Zealand players aspire to play in Europe. However, there is limited opportunities for young Kiwis to come to Europe. I hope that other young NZ footballers can become motivated by seeing what is possible for them if they put in the hard work and dedication.

Why would you recommend Italy as a possible destination for New Zealand players?

The football culture in Italy is incredible and the fans are very passionate about following their clubs. It is a great experience with the style of play and the atmosphere of the games here is second to none. It’s one of the best football countries in the world.

What have you enjoyed most of Italy in these few months you’ve spent there?

The people here have been very good to me. They are all very understanding and help me a lot with me speaking very little Italian. The coaching staff and team mates at the club have made it a good experience for me so far and I have learnt a lot from them. Also the gelato is very good!

What’s your target of the season?

My target for this season is to improve myself as a player and prepare for first team football. And also make an impact straight away for the team and play well.

Many of the players from the team that reached the round of 16 in the 2011 U-17 World Cup are now playing at professional level with prestigious clubs in Europe, such as Tim Payne at Blackburn, Bill Tuiloma at Olympique Marseille, Cameron Howieson with Burnley, Scott Basalaj with Partick Thistle and now you in Italy. Do you think that many of that squad (you included) could very well represent the backbone of the next generation of All Whites, maybe starting from the 2018 World Cup?

There is a group of very good young players coming through out of New Zealand at the moment. I think there is a very good chance that a good chunk of that 2011 U-17 World Cup team will kick on and play for the All Whites in the 2018 World Cup. Cam, Tim and Bill are already making their All Whites debut.

New Zealand is playing a crucial play-off with Mexico in November. Give us your final score, and tell which could be the key factor for the two-legged tie that could the All Whites a ticket to Brazil.